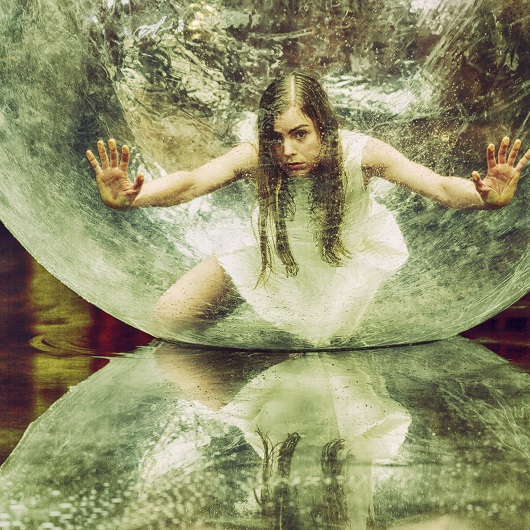 In September 2015 the tour of Mariken in the garden of delights was successfully concluded. Twenty performances were given throughout The Netherlands with an average attendance of 70%. Below you can see the trailer and read the responses of the audiences and the press. Click here for photos, videos and further information.

On Sunday 11 November 2015, in the Koninklijke Schouwburg in The Hague, the world première of the latest production of OPERA2DAY took place: Mariken in the garden of delights. In this newsletter, we share a short selection of the reactions of the audience and the press. The response of the audience directly after première was very enthusiastic. ‘How we enjoyed an impressive, beautiful performance!' wrote one audience member. ‘It is so beautiful that you succeeded in really involving the audience in the story,’ was another response. Unanimous was the praise for actress Hannah Hoekstra, cast in the role of Mariken, the central character of the show. Many came to share with us how touched they were by the moving closing scenes. This was the opinion of a broad cross-section of the audience, including for example, the responses of the students of the Dalton Voorburg en Segbroek College, represented by 100 students. The students found the production very special and also amongst them, were many moved to tears at the end of the performance. Since winning the hearts of a new audience is central to the aims of OPERA2DAY, also for newly composed operas such as this one, this response makes us very proud!

The survey conducted by the Koninklijke Schouwburg after the performances in The Hague showed that the audience rated the performance at 7.8 on average. Some of the many reactions: 'A beautiful show, varied in rhythm.' - 'Superb! A fantastic mix of modern and "alte" music; culture, cultural criticism and cultural history; language and theatre. The show was a magnificent medieval "morality" play in a modern setting and with a modern message, all in balance. Beautiful!' - 'Restrained.' - 'Original, charming, beautiful, powerful.' -  'Most impressive. Fascinating musical theatre. Afterwards I dreamt of the devil.'

In the responses from the press, there is a palatable appreciation for the initiation of this project by OPERA2DAY. 'Bravo!' wrote Trouw, who also praised the ‘boldness and courage' of the company. It is ‘an incredible achievement’, according to the Theaterkrant. The level of the performance was ‘overall’ praised. ‘The performance left little to be desired. The eye is treated to aesthetically pleasing images and the music resounds at a high level under the direction Hernán Schvartzman. Amongst the singers, one finds celebrities such as Michael Chance, Jill Feldman and Julian Podger', writes the Telegraaf.

In the deeper descriptions and evaluations of the work by the press, the reviewers all highlight differing elements as their favourites. According to the Volkskrant, it is 'a stroke of genius by staging director Serge van Veggel to have the main role [...] played by an actress of Hannah Hoekstra’s calibre'. For the Trouw, it is the score that is ‘the strongest part’. ‘Already in ouverture, Tsoupaki lays her cards on the table. Beautiful roulades bouncing back and forth peppered with dry blows did exactly what an ouverture must do: sharpen ones ears. [...] Beautiful elements such as are found in the ouverture return throughout the opera.’ ‘The most creative moments belong,’ according to the Telegraaf, 'to the drama that Mariken brings to repentance, a pageant, which is incidentally not at all a pageant here. Charming how Joop Keesmaat works with two dolls, representing Christ and the devil.’ It is surprising how these various elements are named as highlights by one reviewer, whilst exactly the same elements are sometimes described with a shade of doubt by another. It is worth the trouble of reading the whole reviews in order to gain a complete, but ‘kaleidoscopic’ image of the production (for example on www.blendle.nl and www.theaterkrant.nl).