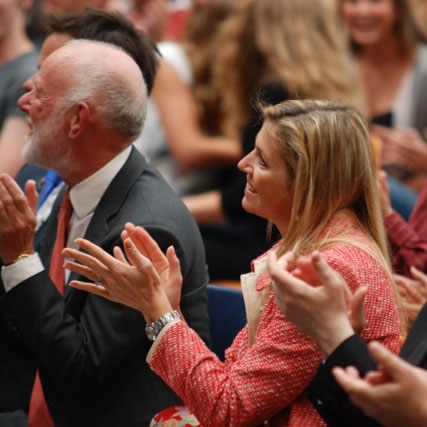 The exclusive and intimate tryst between Don Giovanni and the Princess ended yesterday in a debacle. The meeting was disturbed by a series of the Don’s ex-sweethearts coming for some payback. Assistent Leporello suffered especially, not in the least because Don Giovanni only appeared over Skype. With all this commotion, the facebook opera of OPERA2DAY received an unexpectedly exhausting and energetic start. On the facebook timeline of Don Giovanni video clips of this embarrassing afternoon will shortly be made available.

The meeting with the princess got off on the wrong foot. The central hall of the Montessori Lyceum was completely filled with students from the school, a fact which made an intimate tryst utterly impossible. In addition, Don Giovanni didn’t even actually turn up on the day. In a live skype session, it was seen how – or rather, more significantly with whom – the Don was actually occupied at that moment. Assistent Leporello attempted to save the situation by getting the string quartet that had been invited to the tryst to put on a ‘grand concert’. 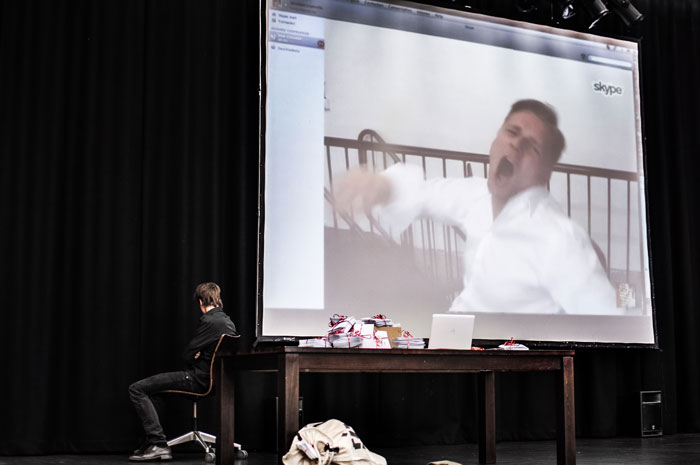 The concert had to quickly be interrupted when a group of three young women appeared to inform us the status of their relationships with Don Giovanni. Leporello managed to fob them off fast enough but was powerless against the furious Zerlina. She took to the stage and made Leporello look extremely stupid, all before the eyes of the Princess. When a woman in full bridal attire then turned up and it transpired that she had earlier that day been deserted at the altar by Don Giovanni, the students had had enough of him. A serenade sung by the Don via Skype – accompanied by mobile phone – was to no avail. In no uncertain tones, they let Don Giovanni know that they would rather that he disappeared. It thereby became evident that we had landed in the finale of a Mozart opera! 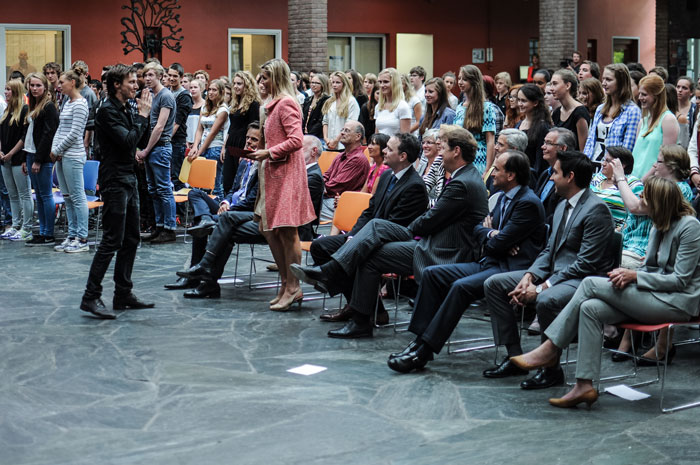 After the conclusion, Princess Máxima with her renowned charm, knew well how to calm the inflamed tempers around her. She conducted interviews with Leporello, the betrayed girls, the disappointed musicians and the assistents Leporello had invited to help him to stage the meeting. In the end, all left with cleared minds and uplifted hearts. Don Giovanni went missing without trace that evening. In the meantime though, both he and Leporello are active on facebook see here. 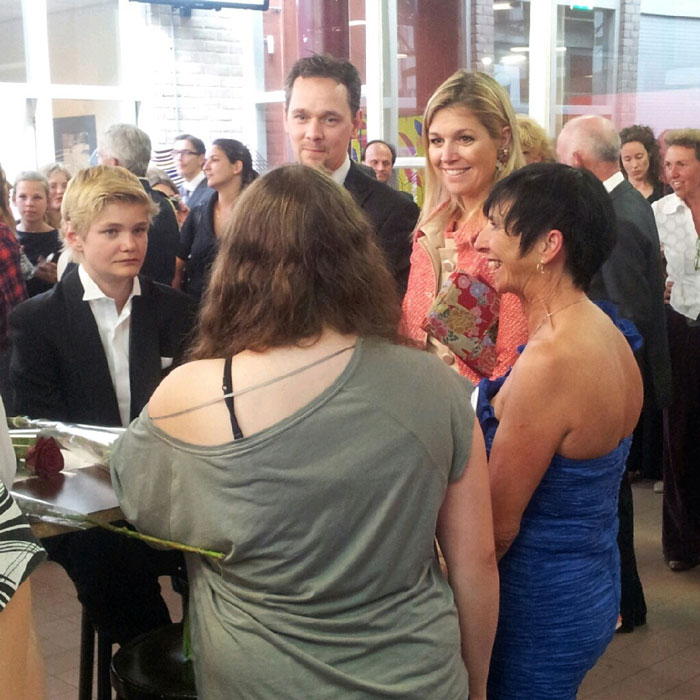 The Princess calms the minds of Don Giovanni’s betrayed lovers, the brother of one of the lovers (still in a suit, directly from the wedding ceremony Don Giovanni failed to turn up to), a concerned teacher of the Montessori Lyceum and one of the organisers who assisted Leporello. (photo Femmy Reijnders)

Photo at the top of the page: Princess Máxima applauds the string quartet in spite of the many disturbances and premature conclusion of their concert. Photo: Richard Mulder.