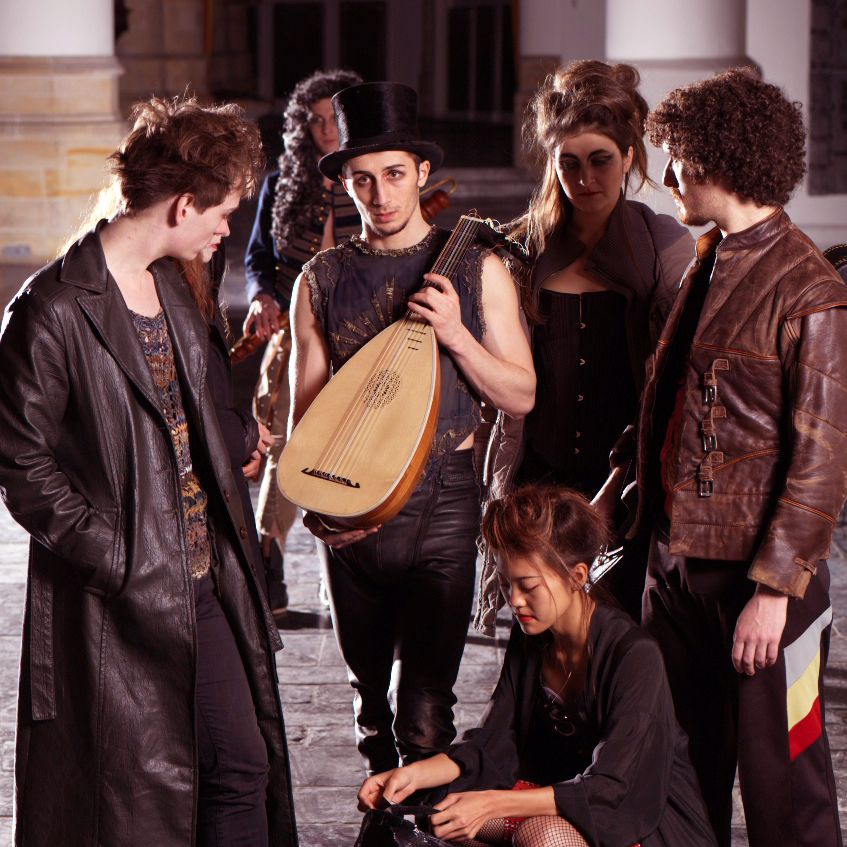 With La Troupe d’Orphée, OPERA2DAY presented a group of itinerant singers surrounding the most beautiful, intelligent, famed and divine singer of all time: Orphée. We heared how his fantastic singing charms wild animals and transports the gods of the underworld. We met his wonderful lover, Euridice, and moved the audience with the story of their love, while amazing visitors with magical dancing and the masterful music of Charpentier.

Sing for us, Orphée
La troupe d'Orphée tours their most successful programme of bewitching dance and festive song. After a joyful opening however, the evening develops in a manner different from that the troupe is used to. The star of the show, Orphée, suggests that now is not the time to have fun, but is the moment to relate the chain of events that has just befallen them. This time, the troupe will transport you to another world, a world wherein you will meet dancing furies and the three-headed dog, Cerbère. The tale that La troupe d'Orphée will tell you this evening is the touching story of Orphée, who loses the love of his life, the wonderful Euridice.

A final glimpse
After Euridice dies, Orphée travels down to the underworld in the hope that he can bring his love back. Much though he tries, he cannot escape from her love. Itinerant singers, dancers and musicians like Orphée himself, attempt to rid him of this love. They have no desire to experience the pain and finality of the last farewell. The show must go on!

By once more relating his love story, Orphée takes a last look at his past. Will the fantastic singers, dancers and musicians with their swirling energy and light entertainment manage to dispel his melancholy mood? Come and see, experience it yourself!

A tribute to Charpentier
La troupe d’Orphée is primarily a performance about the transporting power of music. Secondly, it is a performance about the making of theatre. It also retells the mythical lovestory of Orphée and Euridice in a completely new way. This famous and moving myth has been the source of inspiration for scores of composers, authors and artists. Among those Marc-Antoine Charpentier, one of the most talented and versatile composers of the baroque period. In this production, his masterful short opera La descente d’Orphée aux enfers is the centrepiece, complimented by some of the exciting and vivid works he wrote for the comedies of Molière as well as some of his more profound religious works. Every composition a highlight from the French culture that has also been dominant in the city of The Hague throughout the centuries. With an energetic music theatre production, we created the ultimate tribute to this acclaimed musician.

Music theatre on the tennis court
In La troupe d’Orphée, OPERA2DAY created a production inspired by the dynamic opera history of The Hague. From the middle of the seventeenth century, travelling groups of (often) French troubadors visited the town and even tenniscourts and stables were used as stages for their sparkling theatre and opera performances. Song, dance, music and theatre were fused together in these performances.

Our production was a tribute to this lively period. For La troupe d’Orphée, we have created our own fictive troupe, a music-theatre ensemble consisting of dancers (De Dutch Don’t Dance Division), singers (Vox Luminis) and musicians (baroque ensemble OPERA2DAY). The undisputed star of our troupe is the most famous singer of all times: Orphée. We watch him and his ‘troupe’ create theatre whilst at the same time see them tell the tragic love story of Orphée en Euridice.

OPERA2DAY &  Vox Luminis & The Dutch Junior Dance Division
La troupe d’Orphée was produced by the same creative team that was responsible for the successful location performance production A Madhouse Fair (2012, 2013), which ended up in the list of the top five performances of 2012 in the NRC newspaper. In La troupe d’ Orphée, we collaborated again with the singers of Vox Luminis and worked for the first time with the dancers of De Dutch Junior Dance Division. Just as a group of troubadors would have done in the past, we united song, dance and theatre in a special location: the historical Grote Kerk of The Hague. A stunning space used in a special manner.

La troupe d’Orphée is a production about a ‘troupe’ of singers, dancers and performers surrounding Orphée, the most famous of all singers, who tours courts and towns with his band. In this production, OPERA2DAY goes back to the roots of opera and theatre in The Hague in the seventeenth and eighteenth century. An operatic world that was a reflection of the opera scene throughout Europe, but particularly that of France. We find our inspiration in the past for a contemporary and touching music theatre production of today.

Of tennis courts and stables
Around 1580, after many decades of poverty, the economy of The Netherlands began to flourish and the winds also changed direction in the life of the arts. There was a renewed interest in the arts and literature. Classical theatre was rehearsed in the classroom by students and was practised by rhetoricians and a great curiosity developed for the travelling theatre troupes who passed through from France and England. They also performed their shows in The Netherlands. As in other countries, ‘kaatsbanen’ (a kind of indoor tennis courts) and ‘pikeurschuren’ (stables) were temporarily converted into theatres, where the lively spectacles were shown. 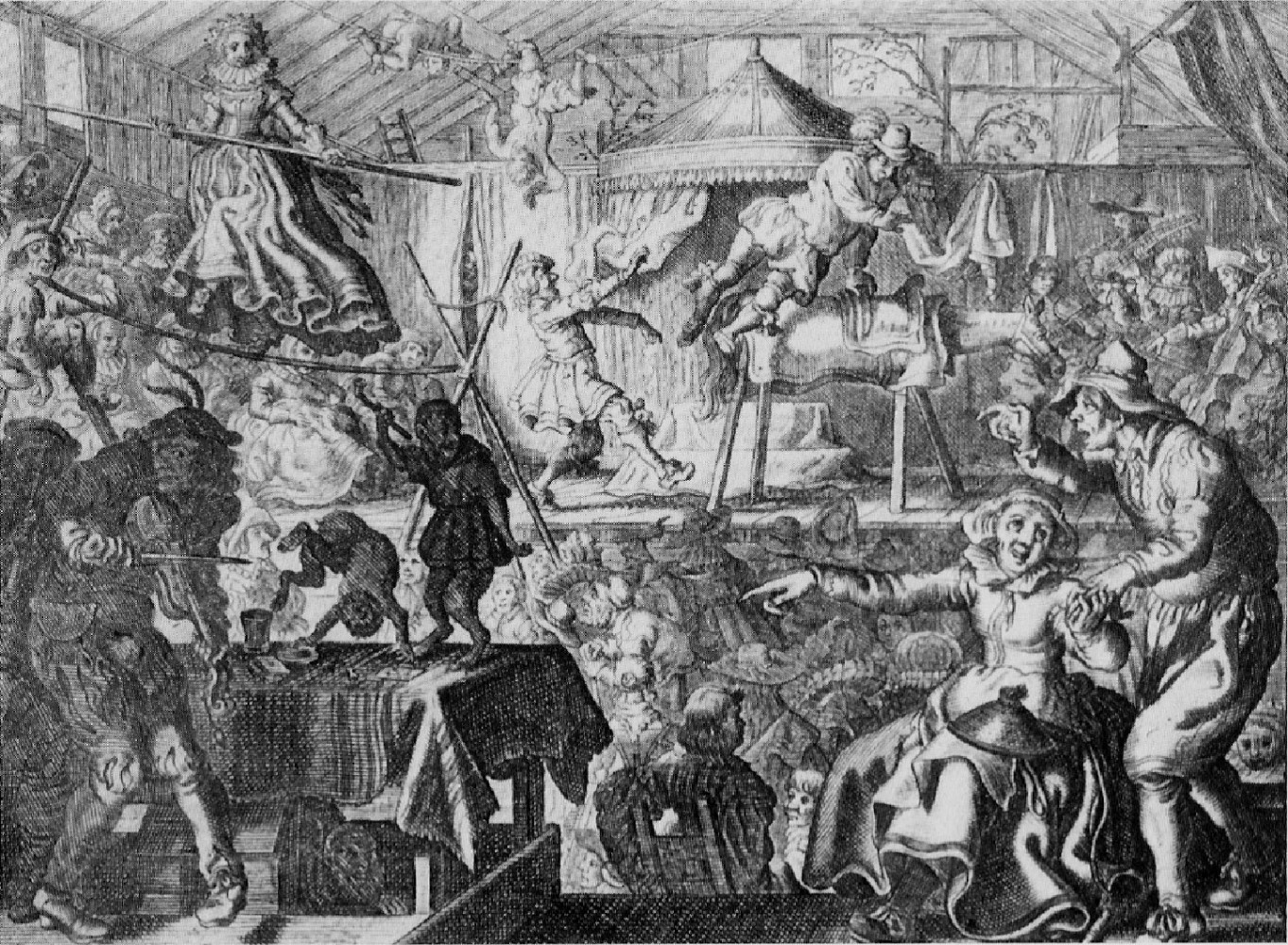 A performance at the Buitenhof in The Hague in 1635

Theatre was adored in The Hague – Willem II was also a great lover of the theatre. And of actresses. A French ambassador wrote to cardinal Mazarin on 12 May 1648 that the prince was difficult to do business with and that one could better try to establish contact with him through comedy. A broad range of works were performed: from classical mythological stories to popular 'comédies'. A particular favourite was the writer Molière, who travelled for years around the French provinces as ‘chef de troupe’ of his own company ‘Troupe de Molière’ before he later took up permanent residence in Versailles with ‘Troupe de Monsieur’ and ‘Troupe du Roy’.

‘Les operistes en tournee’
Meanwhile, a new rage had taken France by storm: the opera. In Paris, Jean Baptiste Lully with his royal patronage, had established a permanent opera house. This was the very first French opera house, since it had also been the tradition in France to stage opera in tennis courts (‘jeu de paumes’) or other court spaces. In 1677, the musician Dirk Strijker established a similar setup in Amsterdam. He clearly had success in this enterprise: amongst his visitors were not only the governor with various prominent citizens of The Hague, but also the 85 year old Huygens, who took the trouble to make the tiring journey to Amsterdam in order to become acquainted with this new phenomenon.

A few years later, in 1682, opera also gained a foothold in The Hague. François Caillault’s ‘bande François de musiciens et d'operistes’ arrived and established the first French opera in The Hague in the tennis court of Pieter van Gool on the south side of Casuariestraat. A stream of French troupes performed their vocal productions and ballets, the performances often a blend of both genres. In 1804, the French and Dutch theatres in The Hague were given their own permanent house, in what is now the Koninklijke Schouwburg (Royal Theatre). Since French opera was performed here, the building was originally called the Théâtre Français. This institution existed until 1919 and brought an almost never-ending stream of operas and comic operas to The Hague.

Old energy = new energy
The opera and theatre life of seventeenth century The Hague was lively and dynamic. Travelling ‘troupes’ devised multidisciplinary productions and made creative use of the locations available, with great enthusiasm realizing impossible plans: we recognise ourselves! The energy is contagious and the surviving stories and images are more than inspiring. As The Hague’s new opera company, we wish to create a production inspired by the dynamic history of opera in the city. In this, we will use repertoire from the period in a collaboration uniting song, dance and theatre in a location performance. All this in order to truly touch our audiences, perhaps in the same manner that this music also touched its original audiences.

A masterpiece by Charpentier...
In the seventeenth century in The Hague, ‘opera’ was pronounced ‘ópera’. French culture dominated everything, also the theatre, far into the nineteenth century. And French culture is also central to this production. We focus on one of the protagonists of French opera of this period: Marc-Antoine Charpentier. Overshadowed by Lully during his life, he was the creator of timeless works. We create our own performance out of his music but with one particular work as the production's centerpiece: his chamber opera La descente d’Orphée aux Enfers.

La descente d’Orphée aux Enfers was composed around 1686. It is the French opera about the mythological character, Orphée, who loses his lover Euridice and who then through the use of song, tries to convince the gods of the underworld to give her back to him. The story was a source of inspiration to composers throughout the whole of the seventeenth century in the new genre of opera, thanks to the magical combination of a powerful story and the iconic narration of the power of music. Charpentier’s setting of the story is masterful (as a kind of stepping stone, he had already created a cantata version of the story). The opera is written for a group of solo singers who participate in both solo roles as well as in ensemble singing. The libretto is strong and expressive, whilst the score is full of highly charged harmonies and rich, inventive colours in both the vocal and instrumental parts.

...and more
We want to perform this largely unknown masterwork for our audience, making it the centrepiece of a programme in which other music of Charpentier is also performed. During the period in which he wrote La descente for Mademoiselle de Guise at the French court, he was also working on profound religious music and theatre music for the Troupe du Roy, Molière’s theatre ensemble. In the music for the theatre, we meet a completely different Charpentier from the composer of the melancholic Orpheus story. Here, Charpentier writes playfully, with energetic and sophisticated humour.

La troupe d'Orphée on a tour to the underworld
The theatre and opera world of Charpentier’s time is the point of departure for our Orpheus production. In the descriptions of theatrical and operatic production in The Hague at that time, productions were performed by ‘troupes’ and ‘bandes’. In our production, we present such a troupe. But in this case, our itinerant singers have formed a troupe around the most famous singer of all time: Orphée. This ensemble brings the mythological story of Orpheus and Euridice onto the stage, merging theatre and reality. The story is told as the story of the group itself: the ‘chef de troupe’ Orphée will today marry the singer Euridice, but she dies on their wedding day. On another level, reality and theatre are also united: our group of singers from Vox Luminis is of course the contemporary version of such an itinerant group. 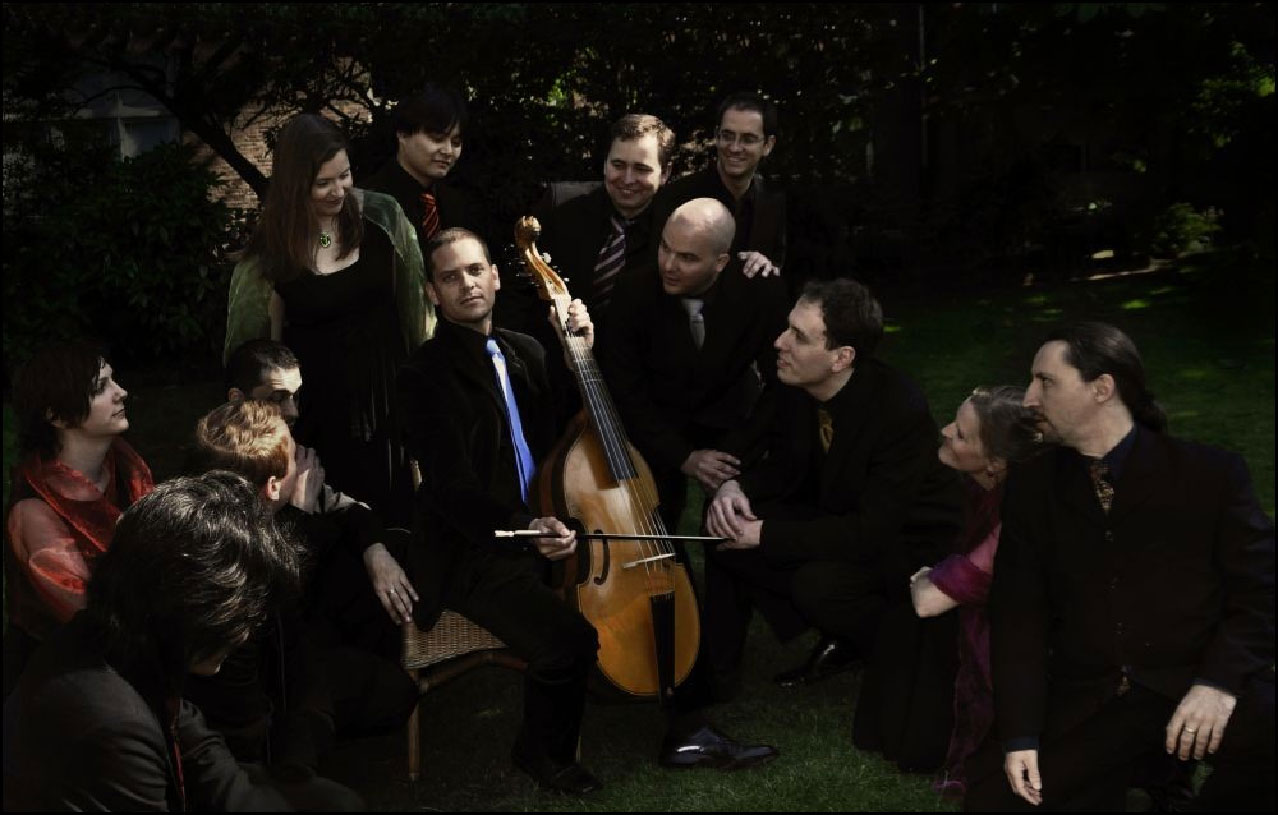 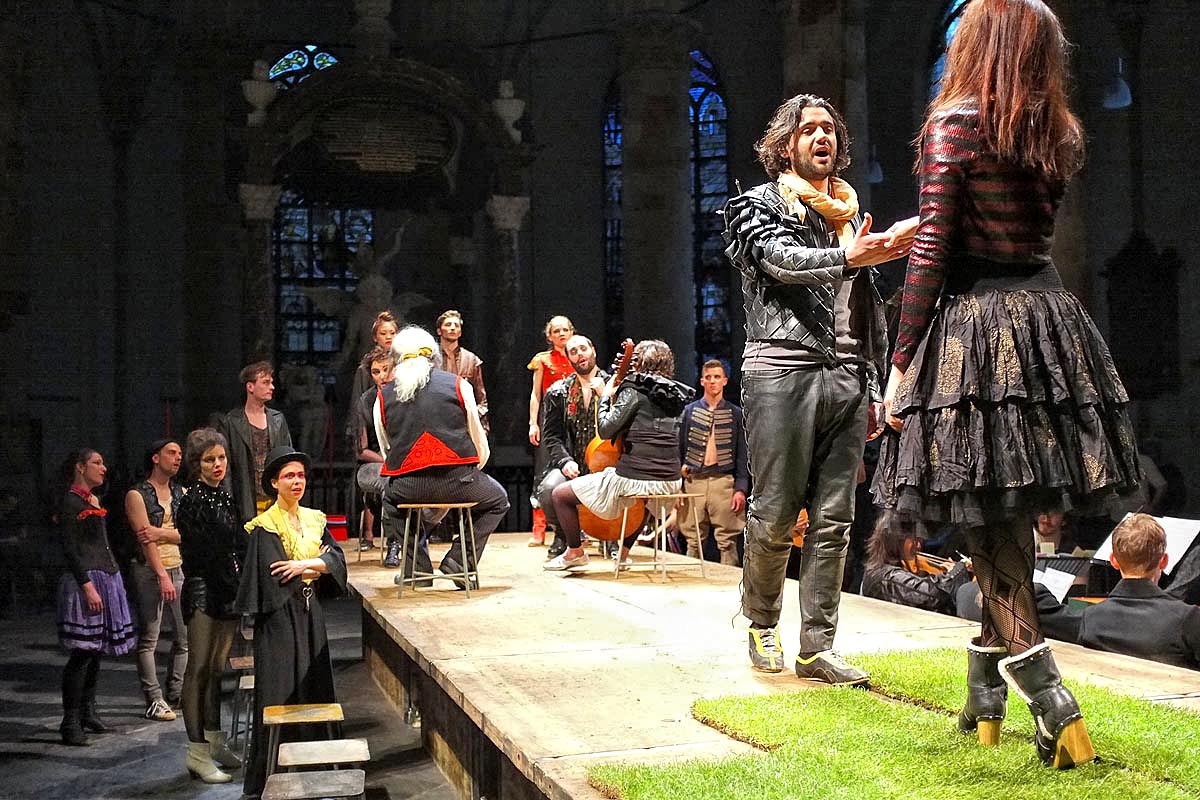 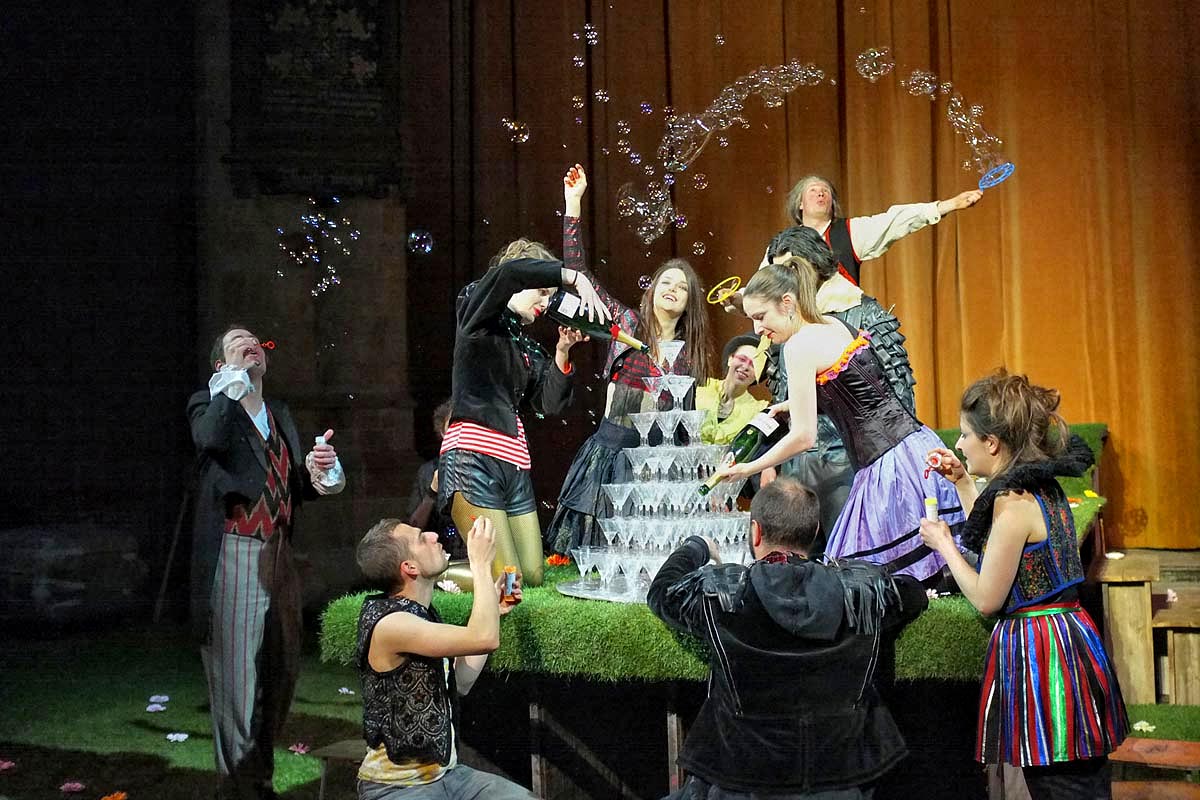 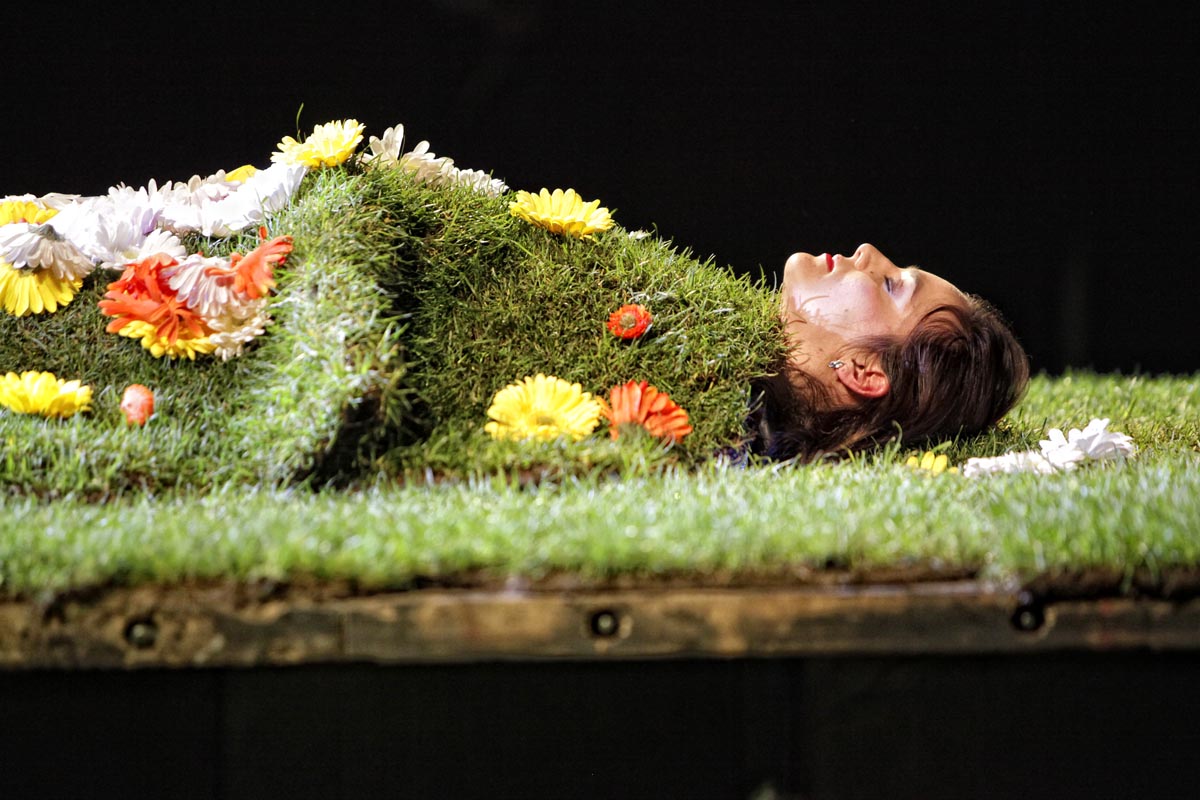 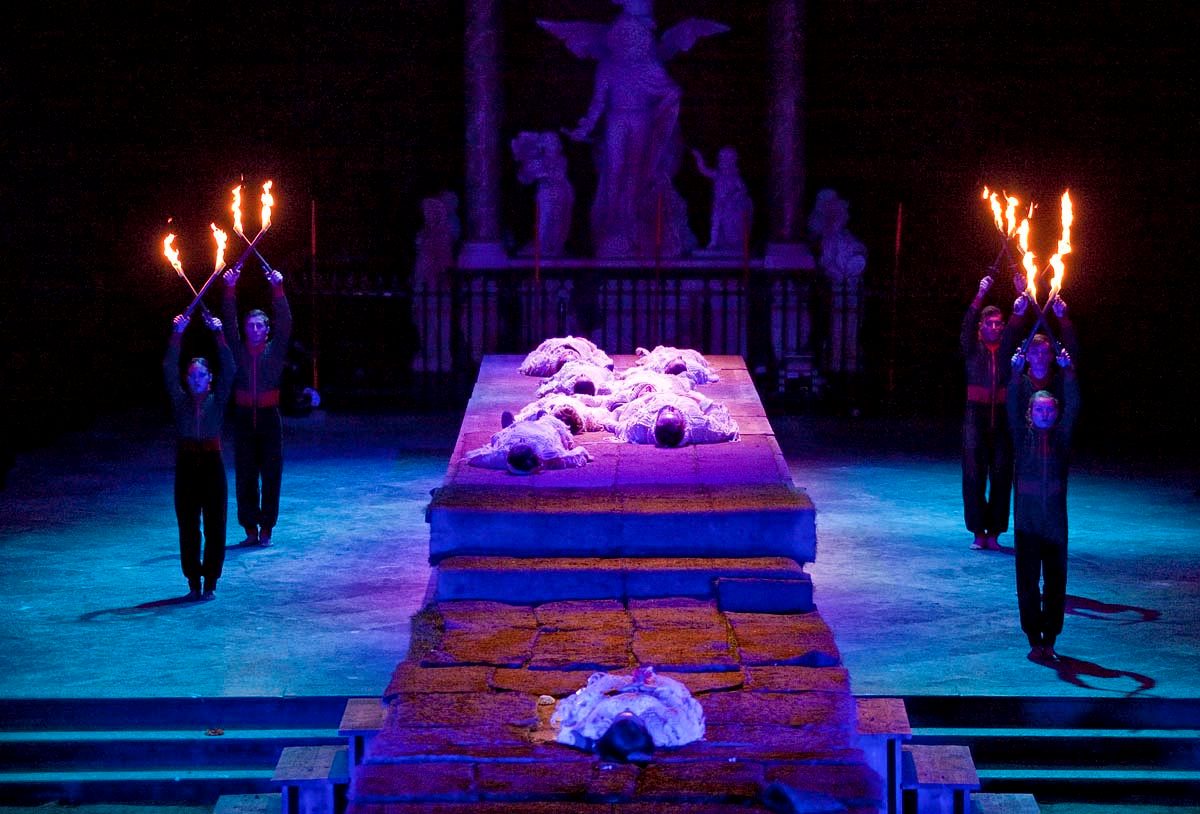 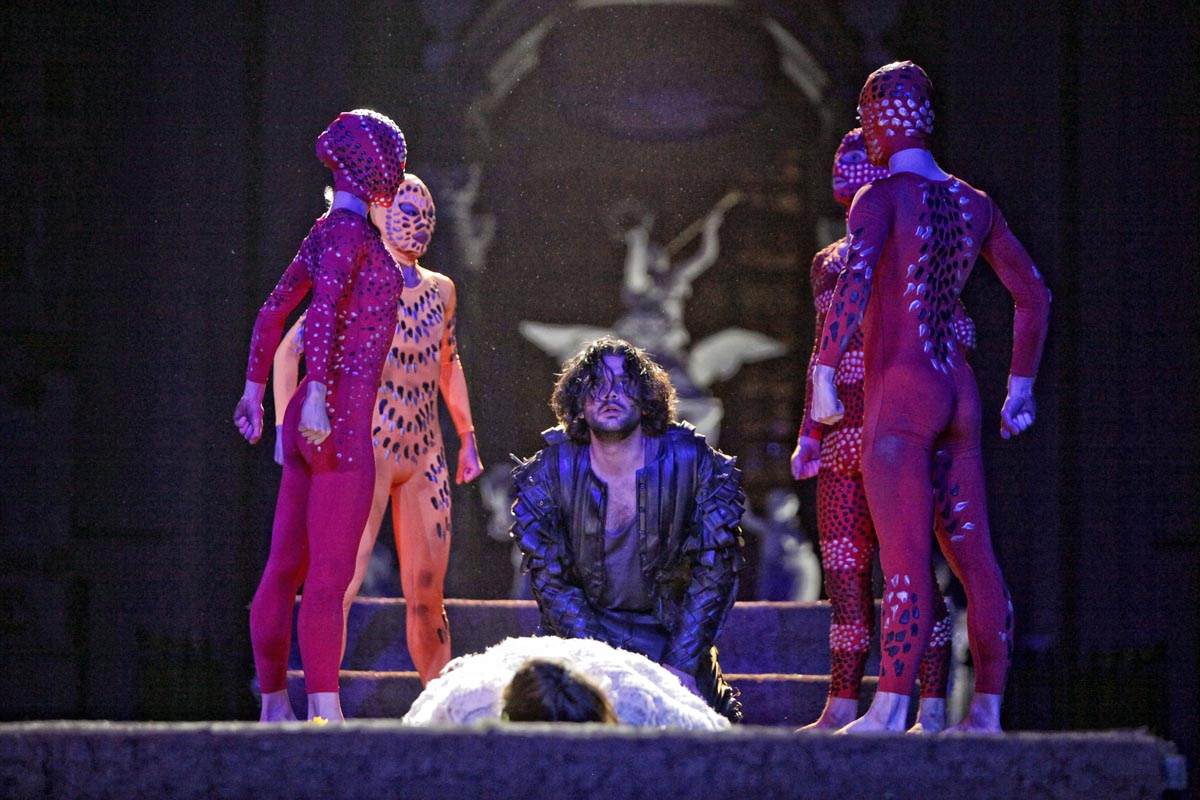 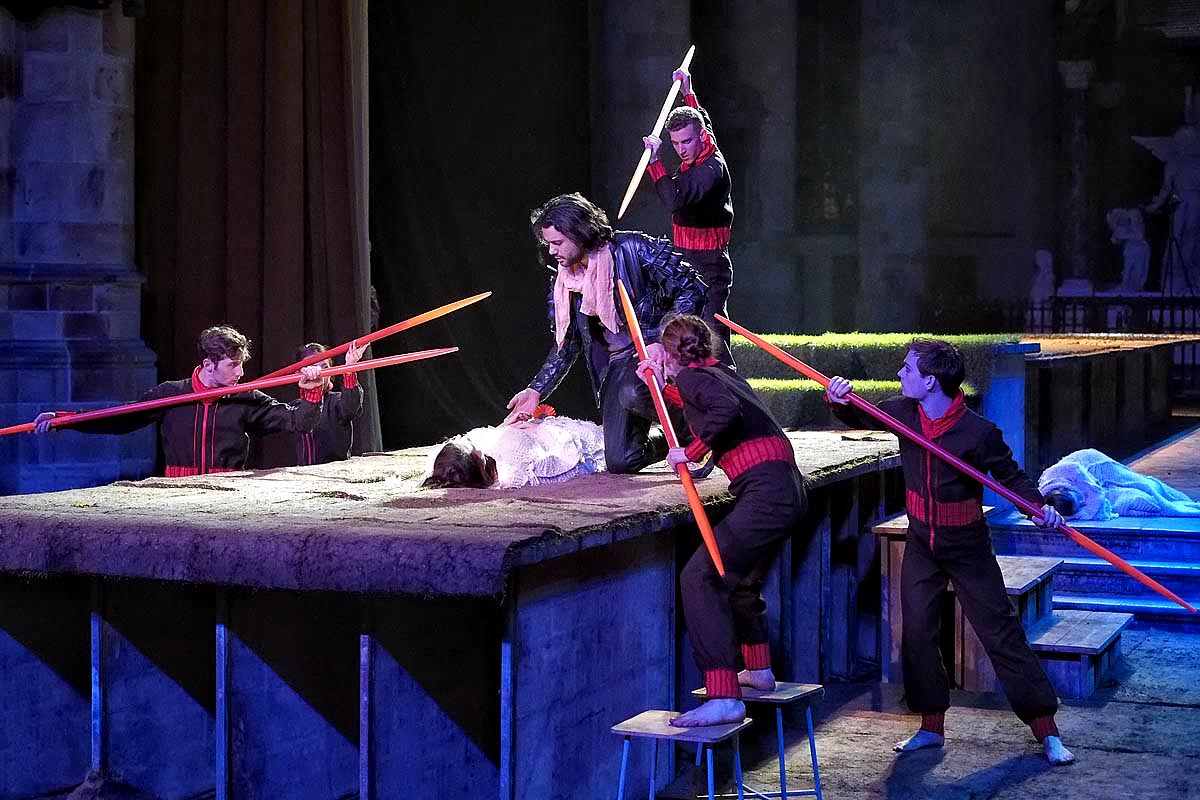 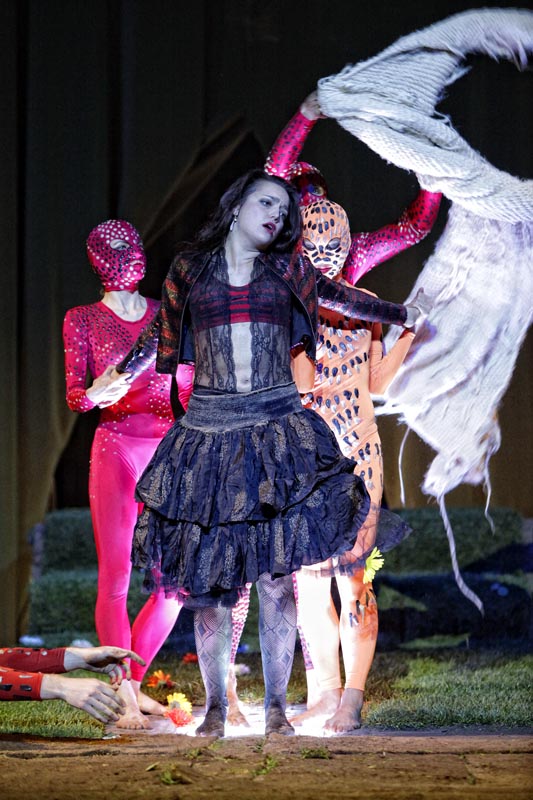 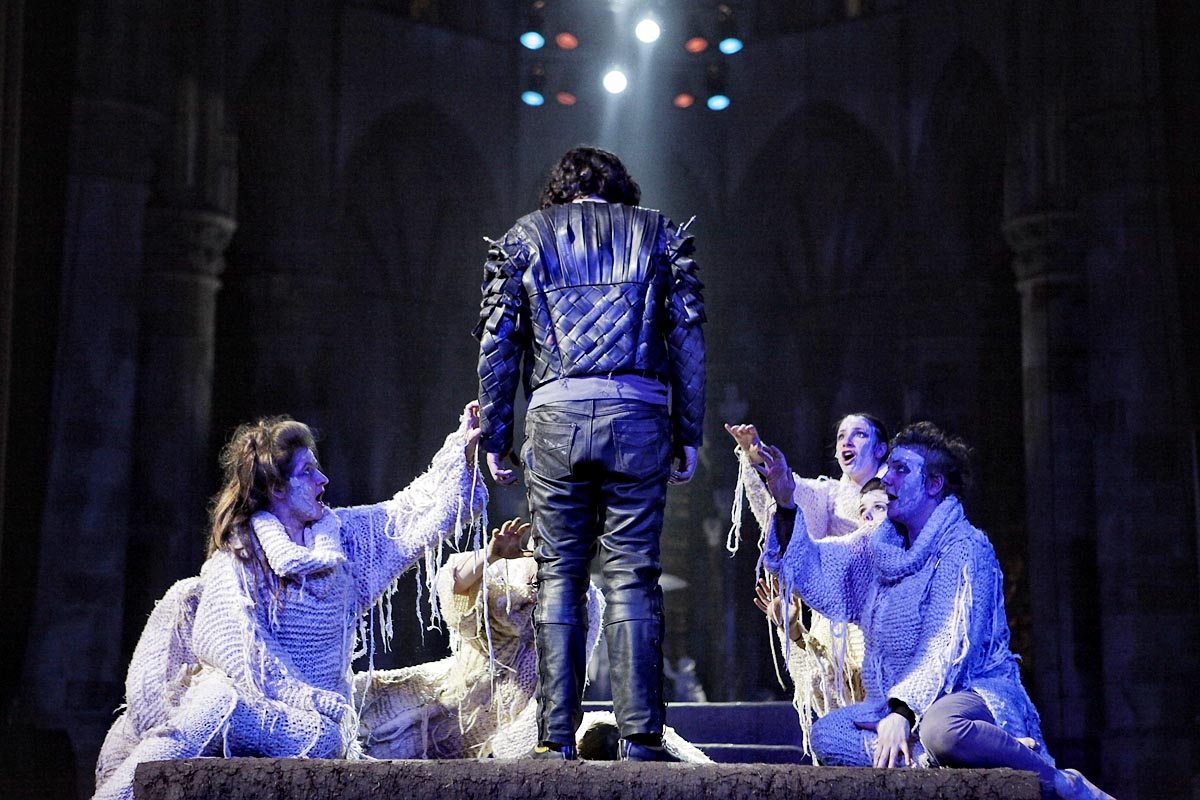 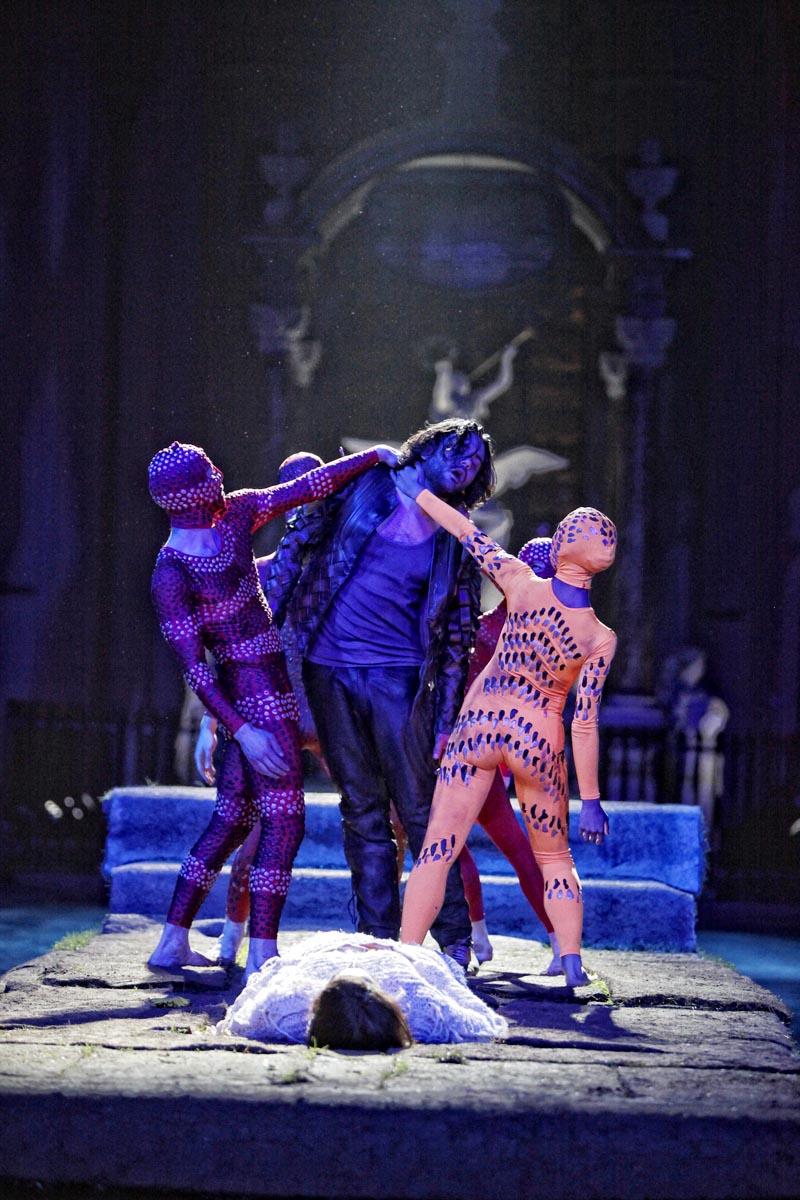 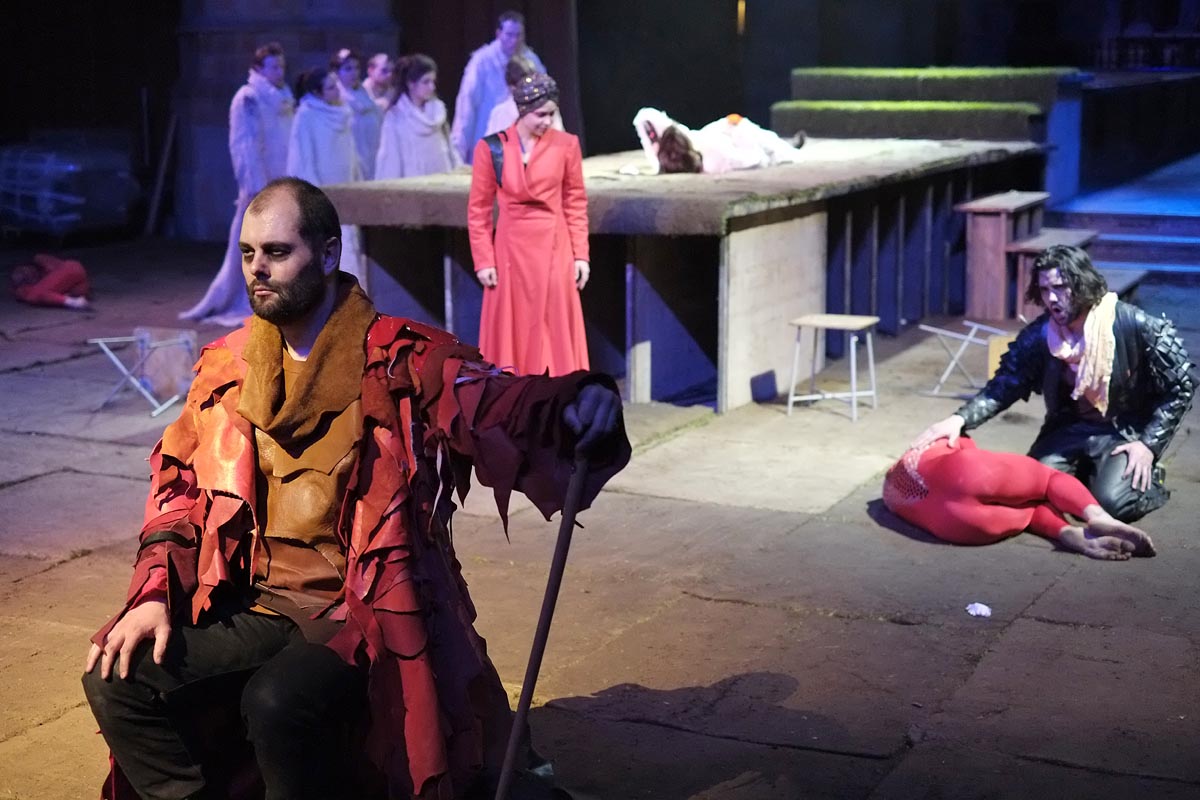 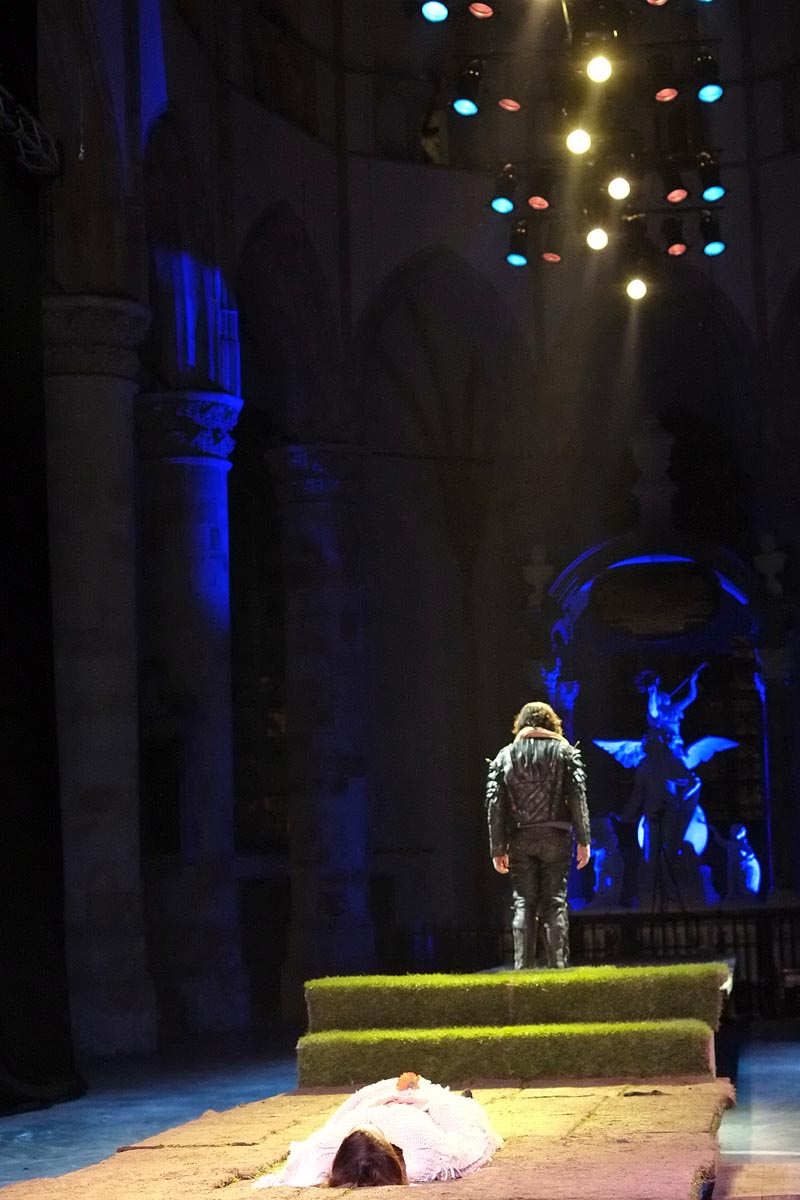 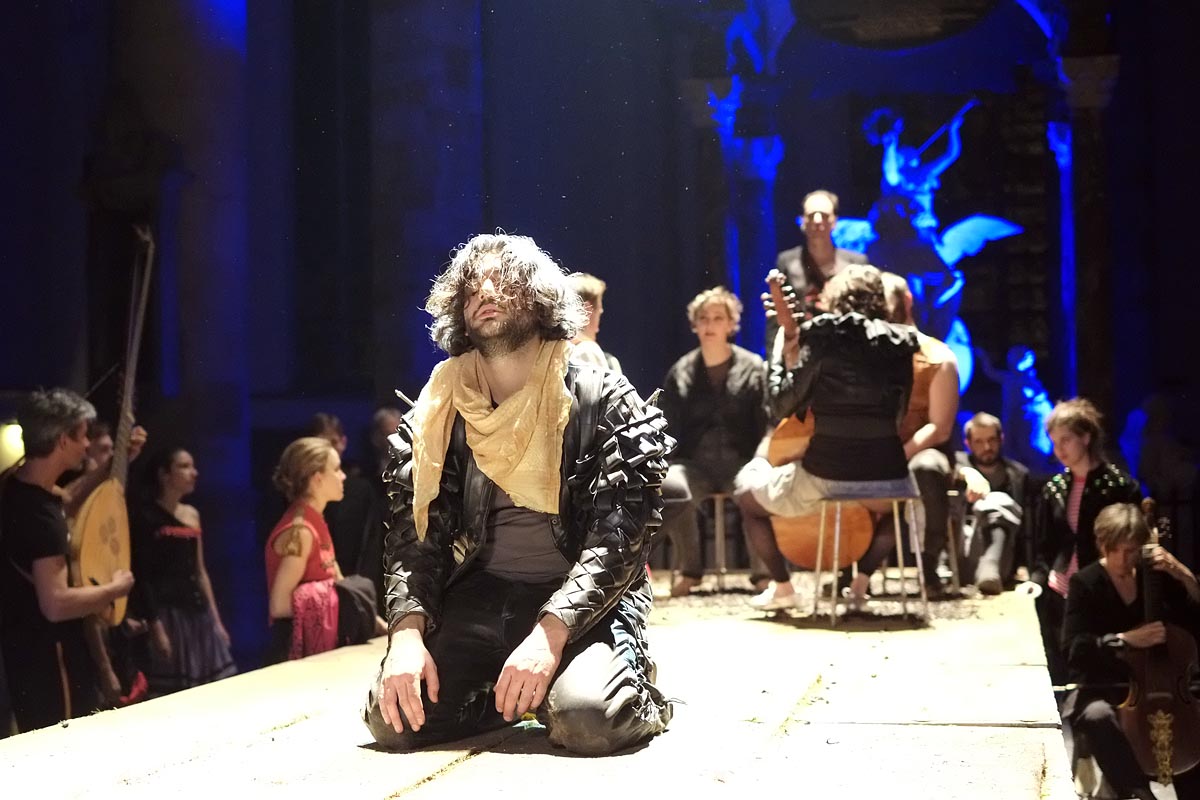 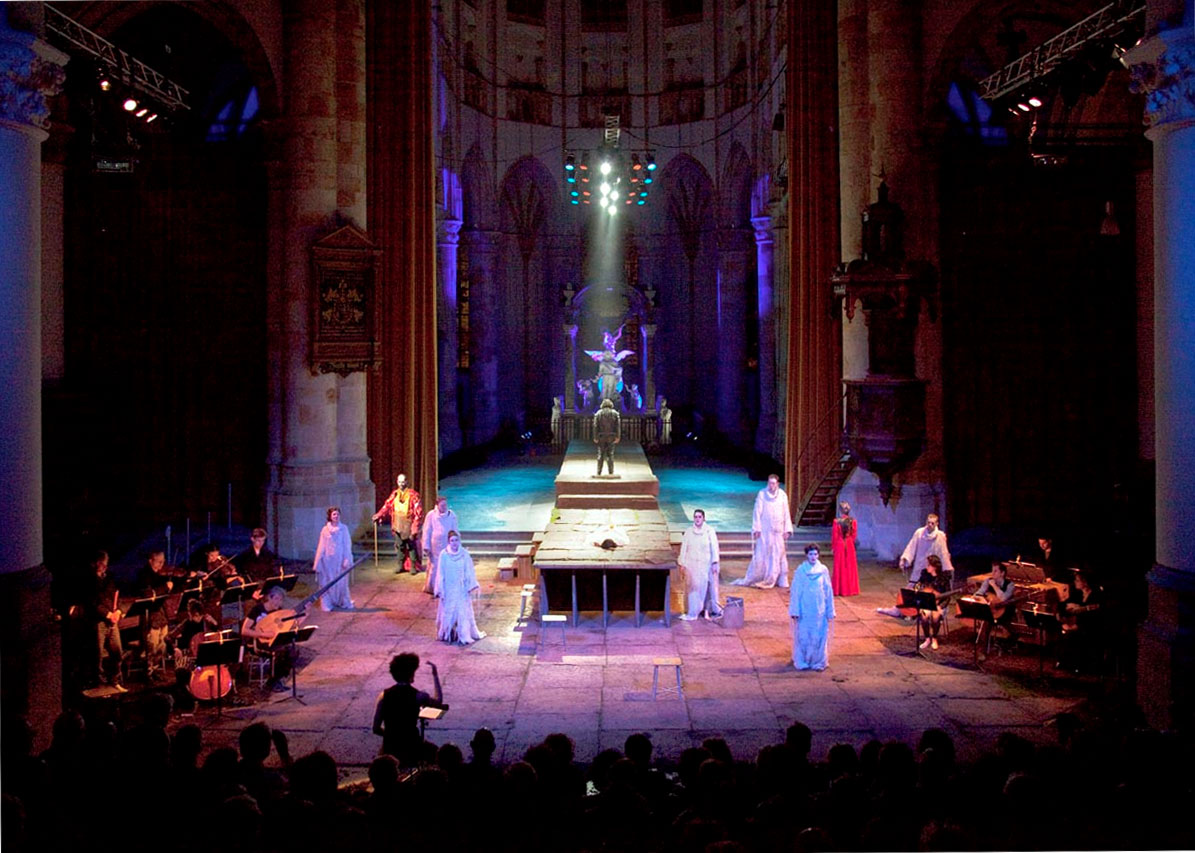 Choreograph Thom Stuart tells about the role of the dansers

ACCESSING THE GROTE KERK DEN HAAG
The Grote Kerk is situated in the centre of The Hague. The entrance for the performances is not by the usual entrance under the church tower, but by the ‘stadsingang’: the large red doors on the corner of Kerkplein / Rond de Grote Kerk, opposite the old town hall.

The doors opened at 19.45 and the audience was welcome to see how the troupe was preparing for teh production. The actual performance started at 20.30.

DURATION OF THE PERFORMANCE

2 hours and 15 minutes, without an interval.