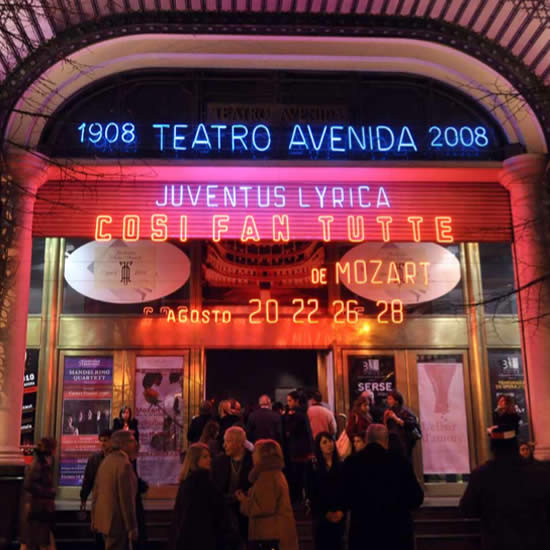 In the summer of 2010, OPERA2DAY in collaboration with the Argentinean foundation Juventus Lyrica, produced Mozart’s Cosi fan Tutte in Buenos Aires. Juventus was responsible for the staging and the singers whilst OPERA2DAY provided the instrumental elements. The artistic director of OPERA2DAY, Hernán Schvartzman conducted the four performances in the Teatro Avenida in Buenos Aires. He created an orchestra of musicians specialized in historical performance practice who had largely received their education in The Hague. It was the first time that a classical opera was staged in a theatre in Argentina to the accompaniment of historical instruments.

Enthousiastic reactions in the international press

The performances attracted 4000 viewers as well an audience of numerous students during the school concerts. The reception from the press was enthusiastic and included much attention for OPERA2DAY, the early music department of the Royal Conservatorium, and the fact that both organisations are based in The Hague.

‘The collaboration of musicians from Argentina and other countries was very fruitful and the unusually homogeneous, youthful and playful ensemble of Argentinean singers was so perfect that this „Così“ could well have been an exemplary production for the Teatro Colón  (Frankfurter Algemeine)

Click here for a pdf of the programme booklet (in Spanish).

Così fan Tutte was made possible thanks to a donation from the Société Gavigniès.

In a cafe, Ferrando and Guglielmo (two officers) express certainty that their fiancées (Dorabella and Fiordiligi, respectively) will be eternally faithful. Don Alfonso joins the discussion and lays a wager with the two officers, claiming he can prove in a day's time that those two, like all women, are fickle. The wager is accepted: the two officers will pretend to have been called off to war; soon thereafter they will return in disguise and each attempt to seduce the other's lover. The scene shifts to the two women, who are praising their men. Alfonso arrives to announce the bad news: the officers have been called off to war. Ferrando and Guglielmo arrive, brokenhearted, and bid farewell. As the boat with the men sails off to sea, Alfonso and the sisters wish them safe travel. Alfonso, left alone, gloatingly predicts that the women (like all women) will prove unfaithful.

Despina, the maid, arrives and asks what is wrong. Dorabella bemoans the torment of having been left alone. Despina mocks the sisters, advising them to take new lovers while their betrotheds are away. After they leave, Alfonso arrives. He fears Despina will recognize the men through their disguises, so he bribes her into helping him to win the bet. The two men then arrive, dressed as mustachioed Albanians. The sisters enter and are alarmed by the presence of strange men in their home. The "Albanians" tell the sisters that they were led by love to them (the sisters). However, the sisters refuse to give in. Fiordiligi asks the "Albanians" to leave and pledges to remain faithful. The "Albanians" continue the attempt to win over the sisters' hearts, Guglielmo going so far as to point out all of his manly attributes, but to no avail. Ferrando, left alone and sensing victory, praises his love .

The sisters are still pining. Despina has asked Don Alfonso to let her take over the seduction plan. Suddenly, the "Albanians" burst in the scene and threaten to poison themselves if they are not allowed the chance to woo the sisters. As Alfonso tries to calm them, they drink the "poison" and pretend to pass out. Soon thereafter, a doctor (Despina in disguise) arrives on the scene and, using magnet therapy, is able to revive the "Albanians". The men, pretending to hallucinate, demand a kiss from the goddesses who stand before them. The sisters refuse, even as Alfonso and the doctor (Despina) urge them to acquiesce.

Despina urges them to succumb to the "Albanians"' overtures. After she leaves, Dorabella confesses to Fiordiligi that she is tempted, and the two agree that a mere flirtation will do no harm and will help them pass the time while they wait for their lovers to return.

Dorabella and the disguised Guglielmo pair off, as do the other two. The conversation is haltingly uncomfortable, and Ferrando departs with Fiordiligi. Now alone, Guglielmo attempts to woo Dorabella. She does not resist strongly, and soon she has given him a medallion (with Ferrando's portrait inside) in exchange for a heart-shaped locket. Ferrando is less successful with Fiordiligi, so he is enraged when he later finds out from Guglielmo that the medallion with his portrait has been so quickly given away to a new lover. Guglielmo at first sympathises with Ferrando, but then gloats, because his betrothed is faithful.

Dorabella admits her indiscretion to Fiordiligi. Fiordiligi, upset by this development, decides to go to the army and find her betrothed. Before she can leave, though, Ferrando arrives and continues his attempted seduction. Fiordiligi finally succumbs and falls into his arms. Guglielmo is distraught while Ferrando turns Guglielmo's earlier gloating back on him. Alfonso, winner of the wager, tells the men to forgive their fiancées. After all: Così fan tutte—"All women are like that."

The scene begins as a double wedding for the sisters and their "Albanian" grooms. Despina, in disguise as a notary, presents the marriage contract, which all sign. Directly thereafter, military music is heard in the distance, indicating the return of the officers. Alfonso confirms the sisters' fears: Ferrando and Guglielmo are on their way to the house. The "Albanians" hurry off to hide (actually, to change out of their disguises). They return as the officers, professing their love. Alfonso drops the marriage contract in front of the officers, and, when they read it, they become enraged. They then depart and return moments later, half in Albanian disguise, half as officers. Despina has been revealed to be the notary, and the sisters realize they have been duped. All is ultimately forgiven, as the entire group praises the ability to accept life's unavoidable good times and bad times.