Don Giovanni: a warm reception in Buenos Aires, The Hague and Rotterdam 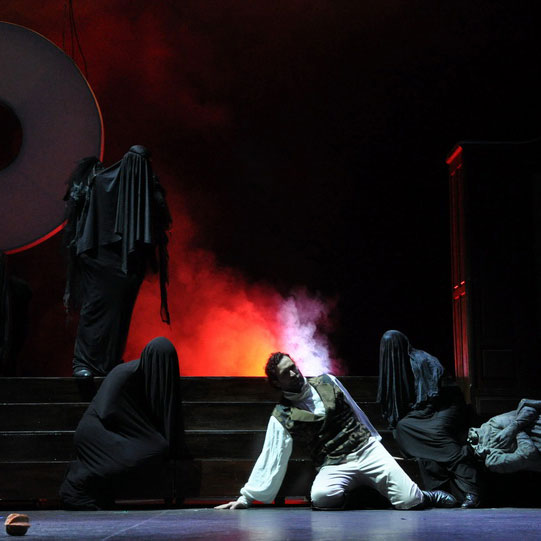 With the last performance in the Rotterdam Schouwburg on Tuesday 2 October, a successful season of Don Giovanni in Argentina and The Netherlands came to a close. In addition, on 10 October, some closing words from Don Giovanni himself also brought the Facebookopera project to completion. This extensive project, organised by OPERA2DAY in collaboration with  the Argentinian Juventus Lyrica, attracted a total audience of over 7000. In both countries, the reception of this production was extremely warm. The audience in The Hague gave the production an average score of 8.6 and it was also placed in the top 10 productions of 2012 on ‘Place de l’Opera. The AD described a ‘sensual and also often funny show’ whilst the Argentinian press wrote about a production ‘that will represent our country brilliantly in The Hague and Rotterdam’. Below is an overview of the comments. On Facebook, Don Giovanni had 351 friends. The start of the facebook opera had Princess Máxima as a guest.

In both countries, the production was received enthusiastically by the audiences. In The Hague (in a three times practically sold out Koninlijke Schouwburg) and in Rotterdam, the comments were constantly exhuberant.  In een online survery that the Schouwburg presented to audiences directly after the performances, the production scored an average of 8.6.  The comments of the audience members in the survey were often lyrical, also from less experienced opera goers:

- 'Fantastic! Particularly impressed by the young Argentinian soloists and the Dutch musicians.  The whole set-up had something very pure and intimate. Even though I have seen this opera many times before, I think this production is a brilliant success.'
- 'Fantastic!Sublime! What a party! '
- 'Refreshing, inspiring, professional,seldom is better justice done to Mozart: what humour and what beautiful musical expression.
- 'The end of a 3 hour long performance…long.  The time disappeared.  So much pleasure.  Enjoyed the orchestra and conductor, all the voices, the acting, the simplicity (of the décor), the lighting.  In summary: a magnificent performance.
- ‘Very beautiful! My first opera, surprising.  I didn’t know that the texts woule be translated and projected’.

The readers of Place de l’Opera selected this production as one of the top 10 best productions of 2012 in The Netherlands.  Don Giovanni came in eighth place.

Also the press was enthusiastic. The header given by the Algemeen Dagblad about the première on 27 September 2012 in The Hague was 'Sensual Don Giovanni by The Hague-Argentinian combination'. ‘Much enthusiasm yesterday in the Koninklijke Schouwburg. [...] The Argentinian singers, complemented by the Dutch barione Martijn Cornet, created a senusal and also often funny show[...]. The Argeninian bass, Pol Gonzalez, stole the show as the comically tragic servant, Leporello, but the female roles of Anna, Zerlina and Elvira were also as good as promised. The Argentinian stage director Ana D’Anna, delivered in beautifully finished unity, a set ingeniously made from large cabinets that also served as portals. The conductor, Hernán Schvartzman, led the period instrument orchestra tightly through the score.

Oswin Schneeweisz onTheaterkrant.nl was critical about the approach to the staging and also the chosen tempi, but also wrote that OPERA2DAY ‘has earned respect for this production’, and that this ‘worthy’ production ‘speaks for itself’. ‘The primarily Argentinian singers sang exceptionally and there was even a surprise from the Dutch side, since the young baritone Martijn Cornet, with his flexible voice and engaging acting, made a sublime Giovanni. He created a nimble hero, seldom hear or seen such as this. Laura Polverini sparkled as Zerlina, equally impressively free, and the Donna Anna of Macarena Valenzuela was in respect to expression somewhat pale, but regarding voice quality, highly impressive’. 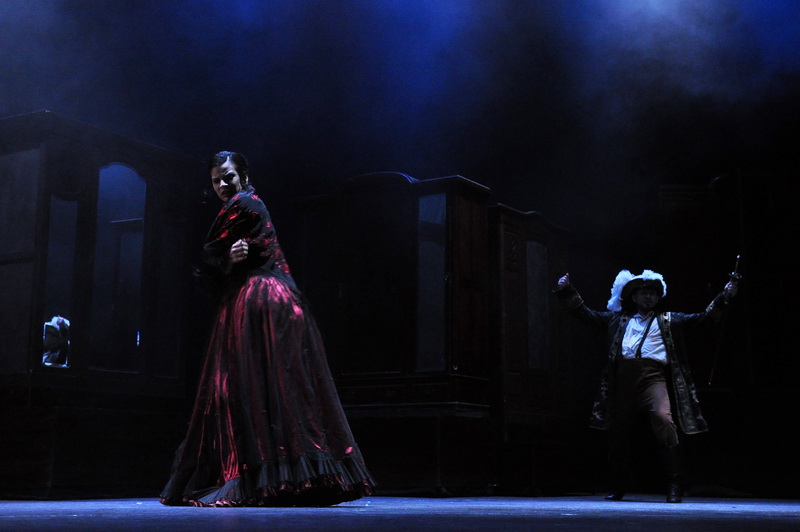 Below is a series of comments from the Argentinian press, from the première there on September 7 2012.

The story, the changes in roles and clothing, the play between the social classes and the contrast between the comic and dramatic moments that were directed in an accurate and realistic manner by Ana D’Anna,  dat op een nauwkeurige en realistische wijze door Ana D'Anna is geregisseerd, paid close attention to the psychological attributes of the characters.  The characters worthy of applause and to be remembered could be found not only on the stage, but also in the orchestra pit. It is rare that such unity between the two is created by Juventus Lyrica. Hernán Schvartzman was well able to encapture the theatrical elements of the music of Mozart and with a well-balanced direction, he created a precise sonority in the ensemble.  Already from the overture, the sound was excellent. Is is difficult to single out one of the singers since all of them were worthy of mention.  Juventus Lyrica and OPERA2DAY created a successful Don Giovanni that will represent our country brilliantly in The Hague and Rotterdam.
MUNDO TEATRAL 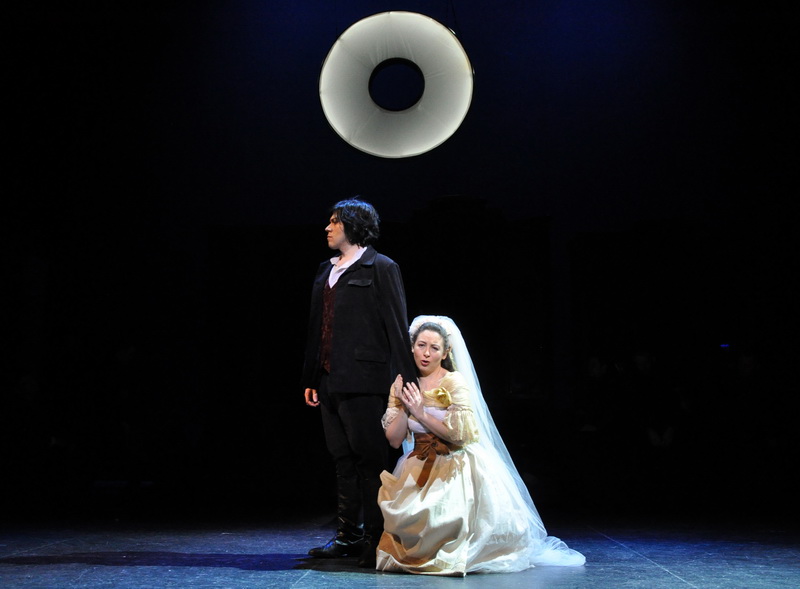 The stage set of Ana D’Anna followed a concept which seemed to say: ‘We all have something hidden in the cupboard’. Crime, jealousy, revenge are some of the secrets the characters have to hide in this story. The period instrument orchestra directed by Hernán Schvartzman, gave an appropriate accompaniment to the cast of great young singers who will also present this production in The Netherlands.  It is an excellent production.
Cien Radios

Mozarts opera, performed by Juventus Lyrica, had its zennith in the singers and everything associated with the music: Baritone Ernesto Bauer presented a Don Giovanni with a full sound, very stable through all registers. The same can be said about Carlos Ulla (Don Ottavio), who also sang exquisitely in his aria. Mariana Carnovalli (Donna Elvira) has a powerful voice and a strong stage presence. Laura Polverini is the perfect Zerlina and the colour of her voice perfectly mirrors the innocence and shrewdness of her character.
Diario Clarín 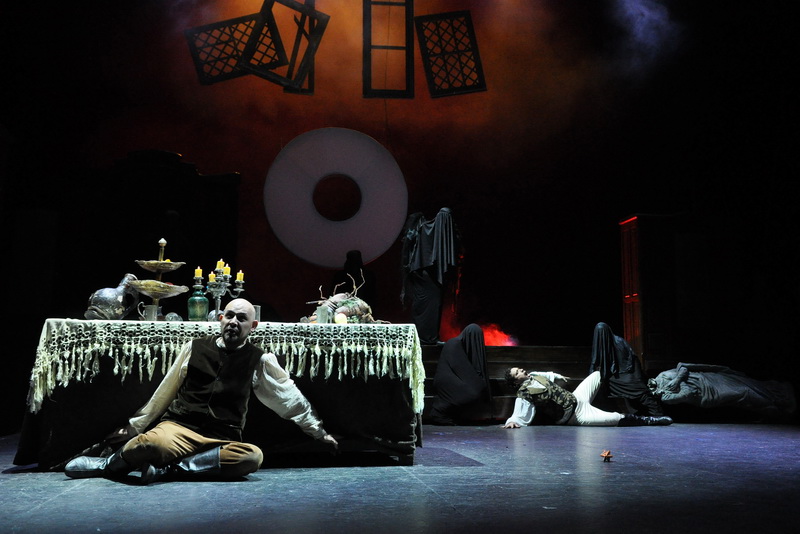 The cunning Don Giovanni was revived in the version that Juventys Lyrica is currently staging under the stage direction of Ana D’Anna. The striking staging makes use of wardrobes to symbolise houses, taverns and secret meeting places.  In the blink of an eye, beautiful transformations emerged.
Martin Wullich

It is long since I have experienced such unrestrained pleasure in an opera theatre such as I experienced now in this performance of the immortal masterwork of Mozart. [...] My first applause goes to the conductor and the stage director. Schvartzman, a young man, did an excellent job of leading the performance, thereby always holding a good balance between the orchestra pit and the stage, and with all attention to the delicate and beautiful orchestral accompaniment of Mozart. He could count on a strong orchestral ensemble,in particularly in the strings, with a young and outstanding concertmaster. Ana D'Anna escaped the danger of trying to ‘improve’ Moart and Da Ponte, and followed the text with full respect, giving at the same time a modern interpretation whereby the psychological definition of the characters was apparent, and which the performers helped to bring to life [...].That would of course not have been possible without an exemplary cast of solists. [...] As a great fan of Mozart and Don Giovanni, I left the Tearto Avenida yesterday floating above the ground.
Luis Baietti

Read here more about the Don Giovanni production. You can also see a selection of photos from the production.  For a larger selection, click here.

See the trailer of the project:
This site uses cookies, will you accept?
Check our privacy-statement here.
Accept Refuse